Why I chose Calisthenics as the training style for me

Today I’m going to talk about the reasons why I choose to do Calisthenics and it’s not just because I teach it. I started teaching it as a byproduct of falling in love with it in the first place, this is not what I thought I would ever be doing with my life but it is where I find myself now.

Here at Movement Co one of our founding principles is that we wish to create a community of well rounded Movers, it’s why we have so many different disciplines. However as Coaches we are for the most part Specialists and that’s not just because of what we get paid to teach but it’s because it’s what we love. It’s why even though I like doing Handstands, I will always defer to Harry and Allan for advice because they are the guys who love doing Handstands, they live and breathe it. I really like doing Handstands don’t get me wrong I do them all the time but if you get me on some Bars or a set of Rings that’s where I feel like I’m home.

So before I get too sidetracked, here are my reasons for loving Calisthenics

Calisthenics and Bodyweight training requires a lot of problem solving, particularly once you move past the basic movements of Pull-ups, Push-ups, Dips and Squats. But even the basic movements can be difficult to master. If you can’t do a Pull-up let alone a Chin-up how do you get to the point of being able to get past this. It’s not as simple as putting more plates onto a Lat Pulldown machine in the hope that it will eventually build the necessary strength to do a Pull-up so we actually need to put more thought into this (btw Pull-ups and how to get them is the subject of another Blog which can be read HERE)

You build a strong core

You can’t do Calisthenics without building a good solid foundation of core strength. Plain and simple you can’t get anywhere without it. I’m not talking just about show muscles, but real strength. The core is powerful and it can help you to do amazing things.

The possibilities are endless

So you have now got your Muscle-up and drilled it to perfection. So have you tried a Close-grip Muscle-up, Mixed Grip, Suppinated? What about hopping over the bar, back clapping Muscle Up, or what about spinning them all together into a routine?

You can do routines with Push-ups, we have Front Levers, Back Levers, Front Lever Pull-ups, Hufesto, Planche.

Once you master one thing, it opens up so many potential new possibilities.

It’s a cool feeling to have control of ones body, to do things that people wouldn’t dream is possible

When I started I wanted to do Muscle-ups, Back Levers, Front Levers and Flags. I really wanted that Flag. I worked damn hard for it, not necessarily the smartest way as I didn’t know what I was doing at the time but I worked hard. When I finally started to get a hold of it it was such a feeling of elation I can’t really describe it, except to say that I felt like I had full control of my body I felt like I could do anything.

These days I still love doing Flags, I love being able to pull myself slowly from the floor all the way through the full Human Flag position right up to a Vertical Flag. Often I’ll get to the top and I’ll pause to have a look around or I’ll start playing with different shapes through the air. I actually find it fun to have this feeling of control. It really is something else and that confidence that you develop from that control spills over into other parts of your life. It certainly changed me, I was always pretty shy as a kid and I’m still one of those people that will happily fade into the background in large crowds but get me in front of a class or my peers or put some bars in front of me and I’m a different person.

Physically it suits me

It keeps me lean. I naturally am a Mesomorph, which means that if I put my mind to it I can put on large amounts of mass relatively easily. When I did a lot of weight training I would easily end up being about 10-12 kilos heavier than I naturally should be. Doing Calisthenics has enabled me to have a relatively lean (for me) muscular body, in fact I’m, leaner & lighter now than when I ran a Marathon with all of the associated training that goes with that. Go figure.

Funnily enough Calisthenics has for some people the opposite effect than it does for me. I have found people with smaller naturally leaner bodies (Ectomorph’s) who put on muscle mass and end up gaining weight, because that’s what their body requires in order to be able to achieve their goals.

You belong to a community of like minded people who cheer each other on.

Like CrossFit, Parkour etc. there is a culture that develops among Calisthenic Practitioners. When you run across somebody that you don’t know in the park doing some Muscle-ups you’ll talk to them about Calisthenics, heck you’ll probably share some tips or do a few Muscle-ups yourself. Likewise in class you’ll cheer on the person you have just met, spot them, laugh when something doesn’t quite work the way you hoped it would be. I have met so many people this way, I’m connected to people all across the globe through Calisthenics and Social Media. It’s a brotherhood, a sisterhood, a way of life. 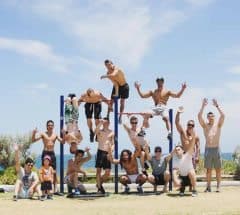 Its different to the norm

I have always felt like a bit of an outsider in some way, the way I think about things, the things that I like aren’t always atypical of what you would expect when you meet me.
Even though Body Weight training has become popular now I took it up at a time when it wasn’t really as well known here in Perth as it is now.
Not to say that getting on-board now is a bad thing, far from it I love to see it grow in popularity and have more people bringing their own experiences and putting their own spin on things, the more the merrier I say!

You can do it anywhere!

You can do it at home, you can do it in the park, at the beach, on holiday. Anywhere you go you can do some form of Calisthenics or Bodyweight training. Handstands, Push-ups, Squats, Dips, take a set of Rings with you and you have endless possibilities! 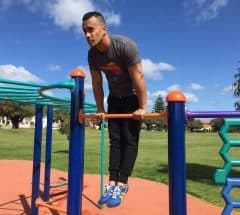 As I said before at Movement Co we strive to create the ultimate mover which is fantastic, there’s nothing wrong with being a generalist. It’s awesome, the idea of being able to move in so many different ways is powerful.

However there’s nothing wrong with being a specialist either.
Look at the coaches. We might cross train to some degree and it certainly has it benefits as there are various areas where we cross over. But deep down we all really love what got us here in the first place and as part of our roles, we strive to better ourselves within our chosen disciplines. This is not only for ourselves though its also to benefit our awesome members.

So if there’s something that you love then do it, whether it’s Handstands, Parkour, S&C, Calisthenics, Gymnastics, Climbing whatever it is that floats your boat, then do it.
Sure you’ll get benefits from cross training which is fantastic and I would highly recommend that you keep it up. But if there is something that you really love doing, then embrace it, set your goals and most importantly have fun along the way!