Today we are talking to Al Kavadlo. If you don’t yet know Al then here’s a quick introduction for you 🙂

Al Kavadlo is one of the world’s leading experts in bodyweight strength training and calisthenics. The author of several books, including the Amazon bestseller Street Workout, Kavadlo is also known for his appearance in the popular Convict Conditioning book series. Famous for smiling while performing some of the most difficult bodyweight exercises imaginable, Al has racked up millions of views on his YouTube channel.

As lead instructor for the Progressive Calisthenics Certification (PCC), Al gets to bring his unique coaching style to fitness trainers and enthusiasts around the globe. Al has been featured in The New York Times, Men’s Health and The New York Post. He is also a regular contributor to Bodybuilding.com. 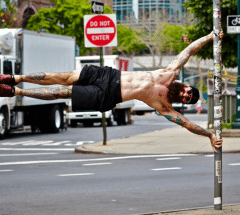 I first met Al Kavadlo along with his big brother Danny in February 2014 at the Progressive Calisthenics Certification (PCC) that was run at Read Performance Training in Melbourne, Australia. Even though it was the first time I met Al, I like many others almost felt like we knew Al because of watching his YouTube videos, reading his books and of course being drawn in by that ever present smile.

Having met the man I can tell you that yes he is just as cool and welcoming in person as he is on film, what you see with Al is what you get. Since that time I have been fortunate enough to get to work alongside Al as an assistant instructor for the PCC that was held in Sydney September 2016 and it gave me the great opportunity to see how a amazing trainer approaches something as big as the PCC.

Thanks for taking the time out from your busy schedule to talk to us today. Can you give our readers a little bit of a rundown on how you came to this point of being a personal trainer, author, Lead Instructor for the PCC as well as being a respected figure in the calisthenics community?

It all happened very organically. I started working out as a teenager, then went on to become a personal trainer in my early twenties, and things gradually grew from there. I got into writing and blogging a few years into my training career and started posting videos on YouTube around that time as well. When I got involved with Dragon Door, that helped propel things to another level. We launched the Progressive Calisthenics Certification at the beginning of 2013 and the movement has been continuing to grow worldwide since then. 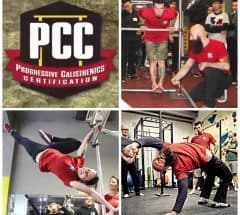 Given that you published your first book only 6 years ago in 2010, it’s been what one could describe as a bit of a whirlwind ride. I know you as being a pretty down to earth guy with a Zen attitude. Do you feel like that approach to life has helped you deal with your success thus far?

Yeah, it definitely has. I’m proud of everything I’ve accomplished and I’m grateful that my teachings have been so well received. But I was a trainer for 7 years before I published that first book, and I was a workout enthusiast for another ten years before I became a trainer, so I’d already put a lot of time into paying my dues by that point. I think part of the reason I have such an appreciation for where I’m at now is because of how much it took to get here. When I published that first book, it felt like it was the culmination of my life’s work. It’s only in retrospect that I now see it as the beginning of the next phase of my career.

Embrace the process. If you don’t enjoy it, you won’t stick with it long enough to make meaningful progress. 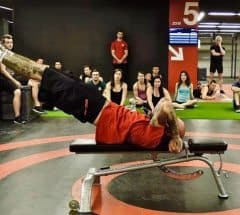 What’s it like being able to work alongside your big bro Danny and your lovely wife Grace doing something that you all have a great passion for?

It’s fantastic, but it certainly has it’s pros and cons. It can get tricky sometimes when emotions get involved with your professional life, and it’s hard for that not to happen when you work with family. It’s funny, one of the most common pieces of advice you tend you hear is not to mix your work and your personal life, but for me there is practically no separation between my work life and my personal life. In a sense, that makes me feel like I’m never really working because I love what I do and I’m able to work alongside people I like and trust, but in another way it feels like I’m never not working. So yeah, there are pros and cons to everything. 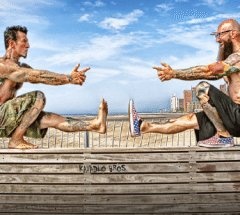 Lastly what does the new year hold for Al, I assume there’s a lot of PCC’s already scheduled in, are any other big plans that you can shed some light on at this stage?

The PCC is going strong into 2017. I’ll be teaching several workshops in the US and Europe, and most likely returning to Australia as well. My brother Danny and I are also working on another book collaboration that we are expecting to release in 2017. I can’t tell you much more about the new book other than that I think anyone who liked our last book Street Workout, will love this next one!

Thanks Al, I know you are extremely busy so I and our readers greatly appreciate you taking time out of your schedule for this interview. I hope everything goes well for all of your future plans and I look forward to the next time I get to see you 🙂