How to achieve incredible movement using the 1% improvement mindset

At Movement Co everything we do is driven by our desire to help people redefine their perception of what is possible and take them on a journey to achieve new movements they never thought were possible.

For some people this is a new experience where age, injury or work life has defeated their perception of what they can achieve in their life and they have fallen to a very poor standard of movement.

Others are pursuing the top 1% of human performance and pushing the boundaries of what is believed to be the limits of our ability to move as humans.

Either way there is a learning curve that can often be daunting. 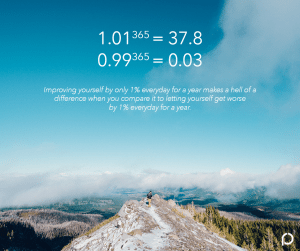 The image above is a clever illustration designed by digital marketing expert Paul Ramondo.

Paul runs http://www.paulramondo.com which is a kick ass blog and advanced digital marketing business based in Perth.

The graphic shows how a simple 1% improvement daily compounds to an almost 40 x performance improvement in just 12 months.

It also shows that falling behind 1% daily leaves you at just a fraction of where you started a year before.

This principle can easily be applied to the way we approach our training and other goals.

Too many people take big initial leaps and then fall right back where they started.

The same thing happens with our training.

You lift 100kg one week and think you're a beast so you chuck 110kg on the bar the following week and then 120kg the next week not giving your body enough time to adapt.

A few weeks in and you're lifting some serious weight but you inevitably either burn out or get injured, both of which send you right back where you started or worse.

True progress is a long term journey. It takes time.

In the beginning it feels like you aren't making much progress but what you are doing is slowly building a solid foundation to build upon.

Like money in a savings account or paying off a mortgage it might not seem like much is happening in the beginning but over time it starts to grow and each subsequent improvement is bigger than the last.

Here are my top 5 tips for developing the 1% improvement mindset:

1. Break down your big goals into mini milestones and celebrate the little wins.

Every movement we teach at Movement Co has a series of progressions and accessory drills that resembles a staircase.

Once you master a component of a movement you progress up one stair to the next progression.

On that stair you might do several broken down versions of that movement in order to master all the components of it and then step up to the next one.

If you try to progress too quickly sooner or later the next step will be too high and you will plateau.

2. Focus on developing consistency rather than big initial leaps.

Don't be afraid to do the same weight or movement again a few times to consolidate it.

Especially don't be afraid to take a step back occasionally to deload and recover so you can then take two steps forward next time.

The main difference between most amateur athletes and world class athletes is that the worlds best just consistently, day in, day out, focus on refining and improving their craft despite the setbacks and challenges along the way.

3. Focus on the details and don't pay off the small increments

In weight lifting the fractional plates allow you to make as little as 2kg increases to your lifts rather than making big jumps.

In bodyweight exercises a slight change of leverage or body position will add a new challenge to a movement without having to launch into the next progression.

Mastering the little details and developing obsessive attention to detail will greatly benefit your ability to progress smoothly towards your goals.

4. Don't chase the pot of gold at the end of the rainbow

You should always keep your goals in your field of vision but don't focus on the end game.

There will always something new to work on and a bigger and scarier goal just waiting for you around the corner.

Focus instead on the journey so that as soon as you realise that at the end of the rainbow is just the start of a new one you will be excited by the opportunity instead of disappointed.

There is a great saying "what gets measured gets improved".

So often we get part way along a journey and give up without realising how far we have come.

Get into the habit of writing down the weights you are lifting and the progressions you are working on as well as how you feel and recover because when you look back on it in months or years you can easily see how far you have come.

Anything worth achieving in life takes time.

You just need to be patient and focus on little victories along the journey.

Focusing on 1% daily improvements in your lifestyle and your training will pay dividends long term and lead to more well rounded and injury proof development than if you were to take big leaps.

Sure, the initial results from taking leaps can be enticing, especially if it is your mates pushing ahead, but just remember the old story of the tortoise and the hare.

Sooner or later your consistency and dedication will pay off and you will move towards your goal one step at a time.

If you have any questions or experiences with the 1% improvement mindset please share them in the comments below.

Is sitting the new smoking? And is movement the cure?

The 7 most common myths about strength training for fat loss

How To Set Goals You Will Actually Achieve This Year